The life story of John Wayne began in the small Iowa town of Winterset...

...now the home of the John Wayne Birthplace & Musuem. Marion Robert Morrison was born on May 26, 1907. The Morrison family then moved to Earlham, Iowa, where they switched his name from Marion Robert to Marion Michael when his brother was born in 1911 and given the name Robert. They rented a two-story home at Walnut Ave and NW 2nd St (photos courtesy of The John Wayne Birthplace).

The Morrison farm was in Antelope Valley, an arid basin just over the coastal range of California Mountains north of Los Angeles. Their eighty acres property was located near the Southern Pacific Railroad tracks, in the desert community of Palmdale. The picture shows the Palmdale train station.

The Morrisons relocated once more, from Lancaster to Glendale, in 1916. They first rented a small house at 421 South Isabel. They temporarily moved to another rented house at 315 South Geneva Street, pictured here.

The Morrisons moved several times during their years in Glendale. They got a house of their own at 404 North Isabel in 1918, seen here.

In 1925, the University of Southern California (USC) offered Duke Morrison a football scholarship and the young man became a USC Trojan. He most likely went to school in this building (Courtesy of the USC School of Cinematic Arts).

John Wayne had lived at 4735 Tyrone Street in Van Nuys from 1945 to 1948, a short way from his home studio Republic. He purchased a five-acre estate with a twenty-two-room farmhouse in Encino, at 4750 Louise Avenue where he stayed until he moved his family to Newport. The house is still there today. The ten-foot-high brick wall with an electrically operated gate was erected by its most famous habitant.

Before he formed Batjac Productions, he had bought an office building for his Wayne-Fellows company at 1022 Palm Avenue. In 1954, Wayne-Fellows became Batjac. Wayne sold the building in 1965 and relocated to Paramount, on the 2nd floor of the Cecil B. DeMille building. During his Paramount years, his letter stationery gave this Batjac address as 5451 Marathon Street. After Brannigan, he moved Batjac again, to 9570 Wilshire Blvd. From Suite 400, he conducted his business until his last year of life.

501 S Buena Vista St in Burbank became an important address for the Wayne family. The Waynes chose the Providence Saint Joseph Medical Center (now between the Walt Disney Studios and Johnny Carson Park) for Aissa’s birth, on March 31, 1956. John Wayne became a grandfather when Toni gave birth to a daughter at St. Joseph’s. John-Ethan was born there, too, February 22, 1962. The statue in the picture is dedicated to Walt Disney's brother Roy and his wife Edna.

Wayne sold his beloved yacht, the Wild Goose, a short time before he died. It is now back in Newport Harbor, owned by the Hornblower Cruise Company and ready for cruises.

For the occasion of John Wayne receiving the Omar M. Bradley Spirit Award in Shreveport on December 14, 1978, he was presented by the “Omar M. Bradley Spirit of the Independence Award” at the Independence Bowl, 3301 Pershing Blvd. Diane Gainey was allowed to follow the recipient with the camera for two days. “In person”, Diane Gainey fondly recalls, “his voice was calming, reassuring, and his comments were to the point.” (courtesy of Diane Gainey).

After he went to the stadium in an escorted motorcade, Wayne tried on the jacket that goes with the Omar M. Bradley Spirit Award for size (courtesy of Diane Gainey).

At the luncheon at the East Ridge Country Club in Shreveport, in conjunction with the Independence Bowl events (courtesy of Diane Gainey).

John Wayne was buried at dawn on June 15, 1979. His seven children, Pilar and only a few friends were in attendance at Pacific View Memorial Park, at 3500 Pacific View Dr, Corona Del Mar. The grave remained without a marker for 20 years.

Orange County Airport remains his namesake, John Wayne Airport – although people recently toyed with the idea of rechristening it.

Wayne owned part of the "Flatiron" building, the Culver City Hotel at 9400 Culver Blvd, then a few blocks from MGM studios. It changed hands ever since it opened in 1924.

During the 1950s, he owned a piece of the Los Flamingos Hotel, along with several entertainment personalities, among them his friend Johnny Weissmuller. It can be spotted in Orson Welles‘ Lady from Shanghai. The gorgeous building is located on the Avenida Lopez Mateos, on top of the highest cliffs of Acapulco, 450' high. It still advertises sleeping in „John Wayne’s Room“.

In August 1941, Wayne and a group of investors went to Mexico City to examine Churubusco Studios. During that business trip, he met the woman who eventually became his second wife, Esperanza Baur, aka „Chata“. Ray Milland introduced them at the Reforma Hotel, Av. Paseo de la Reforma 64. The Reforma eventually became the favorite point for many personalities like Orson Welles. Wayne and Chata danced there for the first time.

John Wayne met his third wife in Lima, Peru in 1951. At the time he met Pilar on a film set near Tingo Maria, he was staying at the Crillon Hotel, Av. Nicolás de Piérola 589.

When he stayed at the famous "Dow's" in Lone Pine, in later years John Wayne prefereed the Motel room no. 20.

During the making of Red River in Elgin, Ralph Wingfield, the owner of the Guevavi Ranch in Nogales, supplied 300 head of cattle to add to Dunson’s herd. Wayne started staying at Wingfield’s ranch in the early Fifties. The Wayne family would often return on Wingfield’s invitation to what is now the Hacienda Corona de Guevavi, 348 S River Rd. The snapshot shows Ralph Wingfield greeting the Waynes (Michael arriving in the background) at the Nogales Airport. He flew in in the small plane seen in the background (photo courtesy of Hacienda Corona).

During the early 1960s, Wayne reportedly purchased the island of Taborcillo, twenty-five miles off the main coast of Panama. The fifty-acres-island has miles of sandy beaches and is a bird sanctuary. After Wayne’s death, his estate sold it. It has changed owners many times before being opened as a tourist resort, sometimes called „John Wayne Island“, complete with a western-themed park.

The entrance of the Hall of Music at Pomona College, 333 N College Way, Claremont, was where Wayne calls out to Donna Reed in the farewell scene of Trouble Along the Way, „Nice legs – for a copper!“ More college scenes were shot at Loyola Marymount University, 1901 Venice Blvd. Wayne’s sons Michael and Patrick were both graduates of Loyola High.

John Wayne had established a close relationship with the National Cowboy & Western Heritage Museum in Oklahoma.  The day of the opening, June 25, 1965, he led a parade as the Grand Marshal through downtown Oklahoma City to 1700 NE 63rd Street. He gifted sixty-three guns, among them his trademark, large loop Model 1892 carbines, first used in Stagecoach. 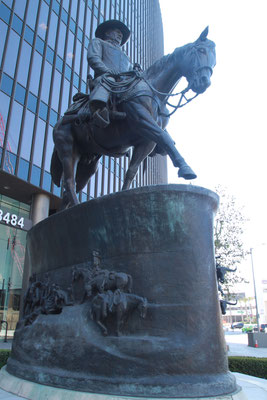 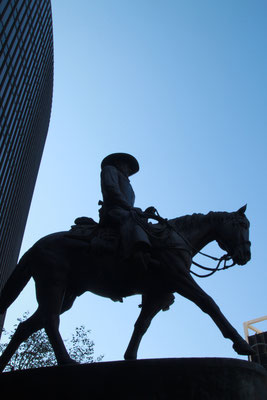 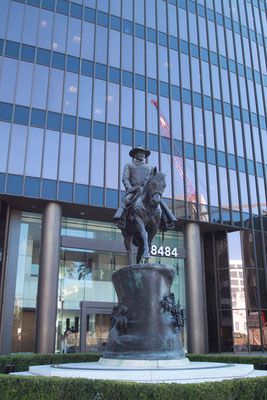 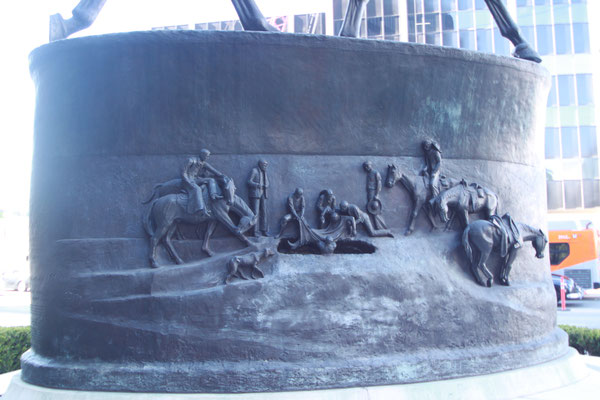 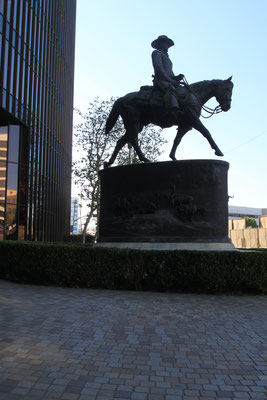 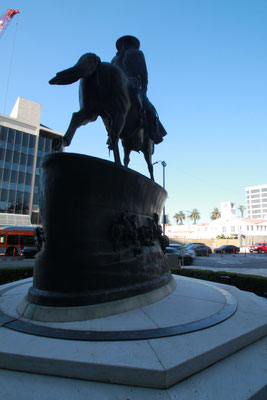 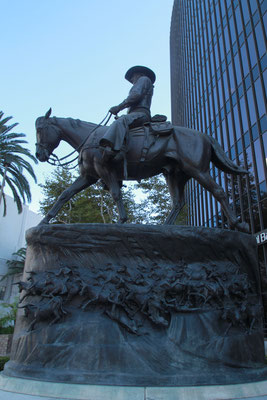 If you like this site, you'll like this brandnew book: the first comprehensive guide to the John Wayne Locations, with hundreds of then-and-now photos, unpublished behind-the-scenes-pictures and detailed tour descriptions

Find directions to locations and anecdotes from the set in this new publication from McFarland, available now at bookstores everywhere

All pictures posted on this website are from the collection of the author, unless otherwise noted